Ideas were being discussed and plans hatched for the next days activities, hillwalking and distant Mondaliath Munro bagging, suggestions of MTB at Wolftracks<link> or the loop round behind Aviemore on the Burma Road. Forecast wasn’t great with cloud, gales and snow on the high tops.

I had been looking for a long test for my new Cube LTD Pro and wanted to get into some remote country. We were staying the Active Outdoor Pursuits Craigower outdoor centre in Newtonmore, so previously I had looked at routes from here out onto the hills.

After much discussion a plan emerged for the mountain bikers, leaving direct from the centre we would head to Kinguisse, and then cross over the low hills behind Ruthven Barracks and drop into Glen Tromie.

We were soon away along the Nation Cycle route 7 towards Kinguisse and already the decision i had to go for a 2×11 over a 1×11 transmission paying dividends as with the wind behind the extra upper gears whizzed us along effortlessly. The remote suspension lockout is also great allowing you to lock down or open up for the tarmac or hopping culverts and kerbs. Changing is smooth and precise with the thumb activated lever and release button perfectly placed. 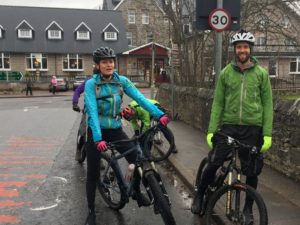 Smily faces at the start

We were soon off-road climbing high above Ruthven Barracks, the old Redcoat stronghold, “rebellious Scots to crush” as the controversial 4th verse of the national anthem proclaims! The track soon become torturous and increasing difficult to ride in ascent as parts washed out over the years, it doesn’t get much traffic these days. At the top, the single track branch to Glentromie was missed in the heather and with the party split, a frantic phone call brought the advanced party back from the brink of disappearing into nowhere and no phone signal!

Regrouped, a nice technical, at times very narrow descent down above Glentromie Lodge was brought to an abrupt halt by a deer fence with a large stile over it. This involved a climb up and over with bikes on back or under arm. As last over my foot slipped on the first rung down, and seems to hang in mid air before dropping the bike over then falling down 5’, missing the pointy bits of the bike but landing back first on thankfully a flat rock! Lots of concerned faces from the ethers as I shook myself off and took stock. Bike was fine, but my hand had ripped through the top fence wire and i had a couple of big holes in my fingers, spouting lots of blood.. A quick rummage found our total first aid complement of some steri strips and a clean paper hankie! With this dually applied and finger stuffed in a glove we continued down on some lovely narrow singletrack through the heather until it ran out abruptly, resulting in a serious sprachle through bushes and trees alongside the deer fence. 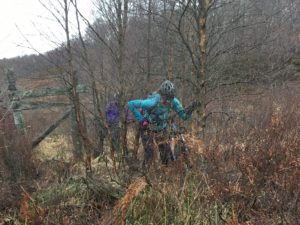 We were soon on the track in Glen Tromie beside Glentromie Lodge. This is a beautiful glen and we were soon speeding along the perfectly smooth surfaced track, soon to change to tarmac all the way up to the bridge over to Gaick Estate. Its complicated to work out which estate is which at this point but the wonderful website Who Owns Scotlandis a good help. 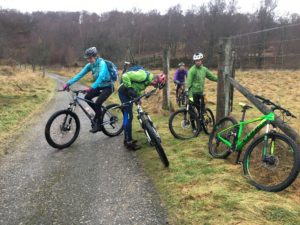 We now had dilemma, take the good track on the western bank a couple of miles up to a dam and hope we can ford the river or plough on on the old Minigaig path which looked to be solid heather, a track going higher on the eastern bank showed promise, with evidence of Polaris use. 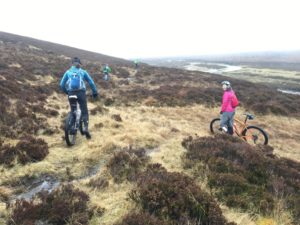 This eventually vanished and it was combination of pushing and riding where we could. The bigger 650b style wheels help greatly rolling over bumps and tussocks and the extra low gears helped greatly on some improbable cycling ground. Some very lonely country out here 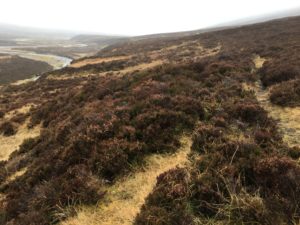 We reached the turnoff point and cut the corner up to the edge of the forest, a horrible grind of a push and carry over heather and bog infested hillside. We were all very glad of the break out of the wind at the trees. 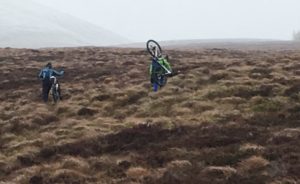 Finally on the landrover track we were dismayed as after 100 yards it was full of windblown snow with ice cracking over large puddles, so it was back to the heather for another 500 yards. Once out of the snow the track rose steadily round the side of the Corbett Carn Dearg Mor before dropping spectacularly in a series of switchbacks down to the top of the glacial feature of the Slochd Mor, with its lovely wee loch perched in its bottom. No time for sight seeing as this is one fast fast decent, confidence growing in the bikes ability let me let go and off the brakes. Really pleased with how stable the bike felt and the Strava <http://www.strava.com> results speak for themselves with 3 of us in the top six for this Strava segment. 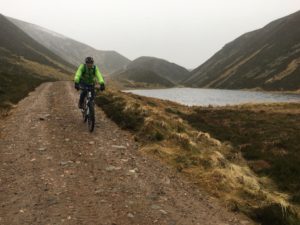 Descending through the Slochd Mor

Once in the flat of Glen Feshie a mile of track gave way to beautiful smooth tarmac from Glen Feshie Lodge out to the main road. Glen Feshie is owned by the Danish billionaire Anders Holch Povlsen who is now the second largest land owner in Scotland, if not the whole UK with 11 Scottish estates in his portfolio. Glen Feshie is a real gem of a glen, the setting for Sir Edwin Landseer’s famous painting “Monarch of the Glen” 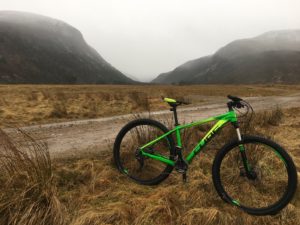 Monarch of the Glen

Back on the smooth tarmac the well placed culverts across the road gave great opportunity to practice bunny hops. The ever so gentle downhill gradient forced a manic pace and the smoothness of the Shimano XT 2×11 drive train with 36-26T Chainrings and 10-40 cassette was flawless.

Once more into the wind…

Once out of the glen we turned back towards Newtonmore with around 10 miles into the wind a real struggle. Feet and hands, already cold and having not felt my feet for several hours only got worse as the find chill bit. Some better nutrition would have helped as i hit the wall completely about 2 miles before Kinguisse with nothing left in the legs it was a long limp home to the accommodation, with the added insult of being overtaken on the cycle path by a far to cheery Cameron MacNeish. Thankfully my companions had arrived ahead of me so the kettle was on and tea made when I stumbled in.

Really delighted with how the bike coped with some really varied terrain over this 60km circuit. I just need to get my act together so I can cope better with these longer rides.