Home General The Shepherds of the Etive – #SIPR2015

So goes the wonderful song written by Duncan “Duffie” MacDonald from Taynuilt. This was the inspiration for our team name for our attempt at this years Scottish Islands Peaks race. An “Allrounder” entry on a wee boat – T Bird, a UFO 31, from our base on Loch Etive. 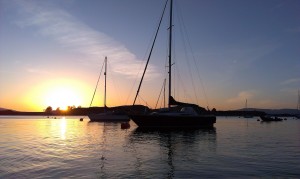 And so it began…

John and Robbie brought T Bird round to Oban on Thursday evening to get organised and loaded and to get registered and kit checked. Kit check should have been simple but turned into a total burach! First Aid kit got slated with out of date bandages! I forgot my hill shoes which were on boat by this time, but surprisingly and worryingly they passed my totally slick Speedcross casual shoes I was wearing!! A big thanks to Neil Matheson for borrowing his mooring for the night and use of his Rib to transport us in and out. 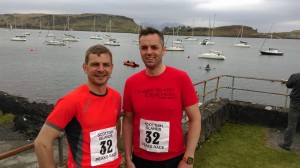 Craig and Robbie before the Oban Run

Friday morning and were all ready for the off. Robbie and Craig have a good fast run round the Oban course and are soon rowing out to us. Hilarity as we watch Manny and Brian board Superstition just as their rower disappears of the back of the dingy into Oban Bay! Once our runners arrived a very swift transfer onto T-Bird along with excellent timing and control from Skipper to get us out of the bay in a great position. 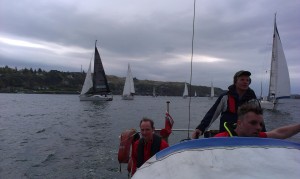 A really good competitive sail (T Bird’s first competitive sail in fact) up the sound of Mull, it was fast and furious, but great fun and very exhilarating. The Skipper sums it up perfectly: possibly the best sail we’ve ever had on T Bird – competitive, tactical, fast & very entertaining.3hrs? Salen came too quickly and a huge faff getting runners ready, well some runners… The plan was for 4 of us to do Ben More, with Robbie staying fresh for the sail to Jura. 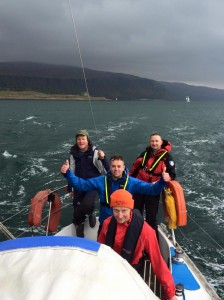 Flying up the Sound of Mull 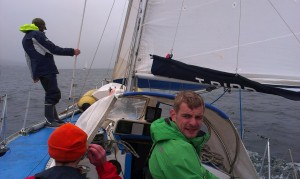 Ben More was pretty full on. We made good time into the first checkpoint, but it just got wetter and wetter. The river crossings were very dangerous. As a pair, the small one would have been ok, but the big one would have been very dicey. I was glad we were a four crossing that in our huddle. I was a bit bossy at that point, but fast water safety training kicked in. I think a lot of teams got very wet crossing which led to the hypothermia cases. 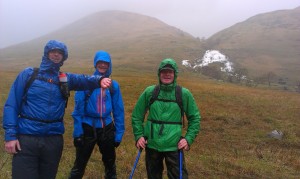 Glen Clachaig – The side burn was a huge torrent! 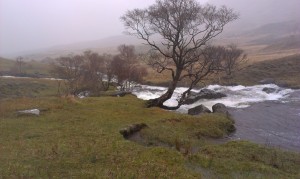 The final pull to the summit is a good scramble on a nice day, but was pretty daunting on Friday night. Everybody was great on that section, given how cold, wet and tired everyone was. The summit was not as bad as I thought it was going to be, but you wouldn’t want to linger. A blast down the top of the tourist path, then I think we surprised the Irish boys from Orlando as we disappeared at 90 degrees to the path to get the scee run down into the corrie, using the sound of water to guide us into the main stream, coming out of the clag right on top of the checkpoint in the gully!

Our navigation on the upper hill was very good, using aiming off, attack points and handrails to make sure where we were, the only slip being the final checkpoint, but we’d aimed off up to the ridge, a bit high, and used the ridge down to it as a handrail. Given the conditions and visibility, we did ok. The big steep grassy headwall of Glen Clachaig was a blast, with several teams visible ahead.

The final traverse out above Glen Clachaig is a great route, and is so much faster and enjoyable than the valley floor. It was hard though to keep up with the Skipper! Bumped into the boys from Capricorn helping the two guys from Firebird, one of which was struggling with hypothermia. Made sure they were ok and were doing all the could to feed and warm him. Happy that they were making slow but steady progress we headed on out. The Capricorn boys caught us up after getting Firebird to the track and headed off to try and get a message to base. Once on the road we met the police van and advised him of the team from Firebird and he headed off to give them a lift.

Very tired by the time we got back to Salen, but thought we made good time on the road out.

Some food when back on board and a fairly slow start to the next leg, but although we were last off the hill, we weren’t the last boat away form Salen.

Meanwhile, from Robbie’s perspective back on T Bird:

Getting the anchor down with help was good, I would’ve struggled on my own. Seeing you guys off was difficult – seriously impressed with your efforts and wish I could have supported you more. Tracking you was interesting – constant updates from the ‘shore team’ (Robyn, Derek and the international supporters in Sweden) helped and hindered. News of us being first in class and first in the race was a bit misleading, although looking back I think you guys were doing very well.

Boats started moving again at 6:30pm, Obedient buzzing around and a trimaran waiting for its runners, with dolphins playing in the bow wake of moving boats! Traffic increasing until the first runners got back and boat got away at 19:40 (Obedient) The trimaran still buzzing about at 10pm when it got dark!

Rain and wind eased off about 11pm, and The Shepards of the Etive returning to the boat just after midnight.  We lost some time on the way down the sound of mull as the wind had almost died completely – Craig a great help on deck until Duart Castle and Gordon excellent helms-manning as we passed Contender just south of Duart (taking a short cut across the land according to the tracker…!). SIPR enthusiast Alex Menary (aka Gramps) says we stopped for hours in the Sound of Mull, think the tracker was faulty at this stage. Gordon stayed on deck to get us down the sound to the south end of Kerrera by about 5am when Skipper and “Andrew the Unflappable” took the helm. 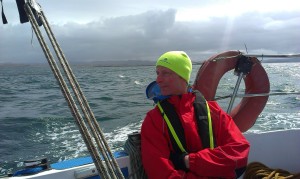 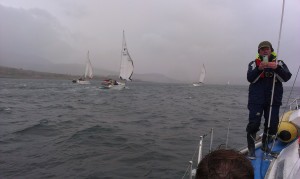 Winds increasing as the morning broke and sea-state too. I tried to get some shut-eye in the bow berth but was in the air every time i dosed off! think I got a couple of hours here and there.

Woken by Gordon having an unpleasant experience in the heads…something I think i’ll never forget unfortunately! Back on deck at 7am, to reef the sail and enjoy some sun!

All back on deck by 9am in increasing winds, going round to the south and onto the nose with a swell coming up the Sound of Jura to contend with as well. Some tacks put in until very close to the bay (in sight and still in the race)!

A few big squalls came through. Craig, Gordon and Andrew superb on deck allowing the sails to spill the wind with speeds well in excess of 30 knots – Skipper trying to stop us sinking as we took water through the heads sink (must put a one way valve on that!). The big squall came between 10:50 and 11am, whipping up a metre of white spray in all directions, pushing Capricorn over in front of us and knocking us flat – the boat heeled heavily, taking water into the cockpit and soaking Andrew the Unflappable (and his phone!). Craig slipped main sheet and Gordon on Jib sheet as boat righted itself back to about 25 degrees (still heeling heavily, but safely). Pinned in that position for 5 minutes (felt like 5 hours) as the dinghy stood vertically and was only held in place by the jib sheet, which was flapping wildly and put a hole in the spray hood window. Dinghy eventually went over and we quickly stowed the jib – sometime during this we’d started the engine and made a decision to motor into the wind for safety reasons, effectively retiring from the race then. Skipper and Craig got harnessed up and onto deck to get the dinghy back on, with help and hinderance from the waves (Lesson of the day: don’t wear saloon pants on deck!). Great courage and skill to do this safely.

Main loose from the mast and flapping wildly, thought the jib was ok but only loosely wrapped (later discovered it was ripped also). Motored into the bay and dropped the main, onto a mooring as Rebel (?) left. At this point I was gutted to have to retire, but my mood back up as Craig agreed to run the Paps with me! 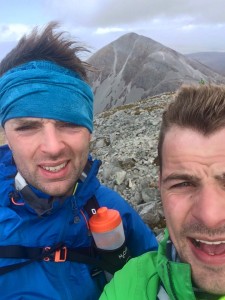 Selfie time on the Paps 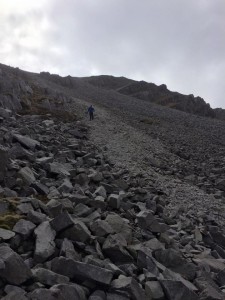 As we set off I realised how rough it was – peat and heather make for slow going. Bright day but fully kitted up to keep warm in the howling wind and frequent showers. Craig showing signs of lack of food and 47km the day before, but put in a great shift to get me to the top of the first pap! great views and high spirits as we reached the top for a selfie, 5 mins in front of the girls from Contender.  First attempt at Scree running back down to the second checkpoint was great fun, almost catching the Irish lads ahead of us.  Made the decision to miss the last two paps for safety reasons – would have been another 8 hour slog!

Back to Craighouse to find we couldn’t get in touch with T-bird, no phone signal or radio contact! managed to scrounge a lift out in a RIB after interrupting a stag do (cheers to Coastal Connection and Venture West!), before heading back ashore to the pub, showers, a penny a second
phone box and fish and chips! Craig and I slept on the floor of the Jura hall, after a few whiskies with the Carnethy Marshals and discussions of the days events! Craig jumped ship and got a lift back to Oban Sunday morning on Coastal Connections Rib, along with the hungover stag party!

Sunday was a great motor sail from Jura to North Connel (via the Kerrera ferry in the middle of the sound to ditch some gear and Gordon) in a little under 7 hours, just home before torrential rain! Unfortunately we found the Jib badly ripped when we unfurled it (2m tear) but managed to fix the top of the mainsail so we could use it in a reefed fashion. 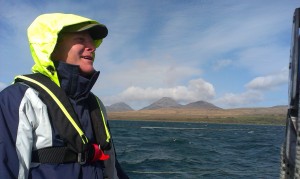 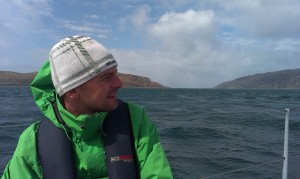 Sunday night: T-bird back on mooring like nothing had happened – proud of her performance in wild weather! Monday was a clean up and taking the sails for repair, feeling tired but exhilarated from the weekends adventure! 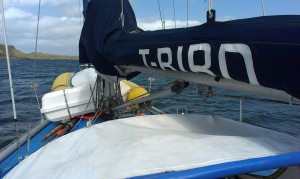 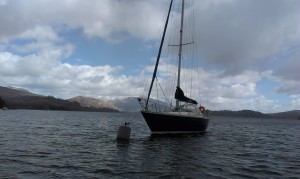 Back on Loch Etive

We will be back to try again!