A day out on the 4 eastern Mamore Munro’s.

The forecast was fairly ok so decided on the 4 eastern most Mamores as the weather looked to be best the further east you went. I was suffering a bit with a sore throat but reckoned I’d be fine, if a bit slow. Also wanted to try out my Inov8 Oroc’s on a long rocky mountain run.

Car left at the Ice Factor and a a quick trot into the bottom of the path up by the Grey Mare’s Tail waterfall. Once above the steep bit the path got a bit muddier and the first big bog I went onto what I thought was soft spongy stuff, but turned out to be waist deep gloop….

The Stalkers paths on these hills are incredible and made for a fairly quick ascent in to the corrie between Am Bodach and Na Gruagaichean. The path bears up right and takes a big dog leg at gentle gradient, the ground was sodden so it was easier just going straight up, cutting out the dog leg of nearly a kilometer, joining the ridge at the bealach west of Na Gruagaichean. I thought I had climbed Na Gruagaichean previously, about 20 years ago, but couldn’t remember the ridge between the NW top and the summit, we may have dropped down the path I cam up as we had come up west of Am Bodach and done the other couple of Munro’s on the way along. Anyway the wind was pretty feirce on the ridge and the cloud was coming in and out, but staying dry thankfully.

Having found some timings on Pete Duggans blog, I had done Na Gruagaichean in about 2 hours, but was feeling slow with this cold building. Pete’s time of 1h22m is impressive. His split onto Binnien Mhor was 22 minutes, so was presently supprised to do this in 30mins, as I thought I was going very slow on the blocky quartzite ridge. I really enjoyed the ridge along from Na Gruagaichean and by the time I got to Binnien Mhor the wind was stronger, but the gaps in the cloud were getting bigger allowing me to see the way off to Binnien Beag. I had planned on taking the East Ridge off as given the foracast and the wind wanted to play it safe, not wanting to get onto to exposed unfamiliar scrambly ground in descent. The east ridge proved a pretty good descent, looking the most obvious from the Summit.
Once off the east ridge and contouring in under the nose of the NNE ridge it was a straight forward descent down to the Lochan. I spied a walker descending off Binnien Beag and met him just at the first steepening, he to had come over Binnien Mhor and was heading for Sgurr Eilde Mhor as well. 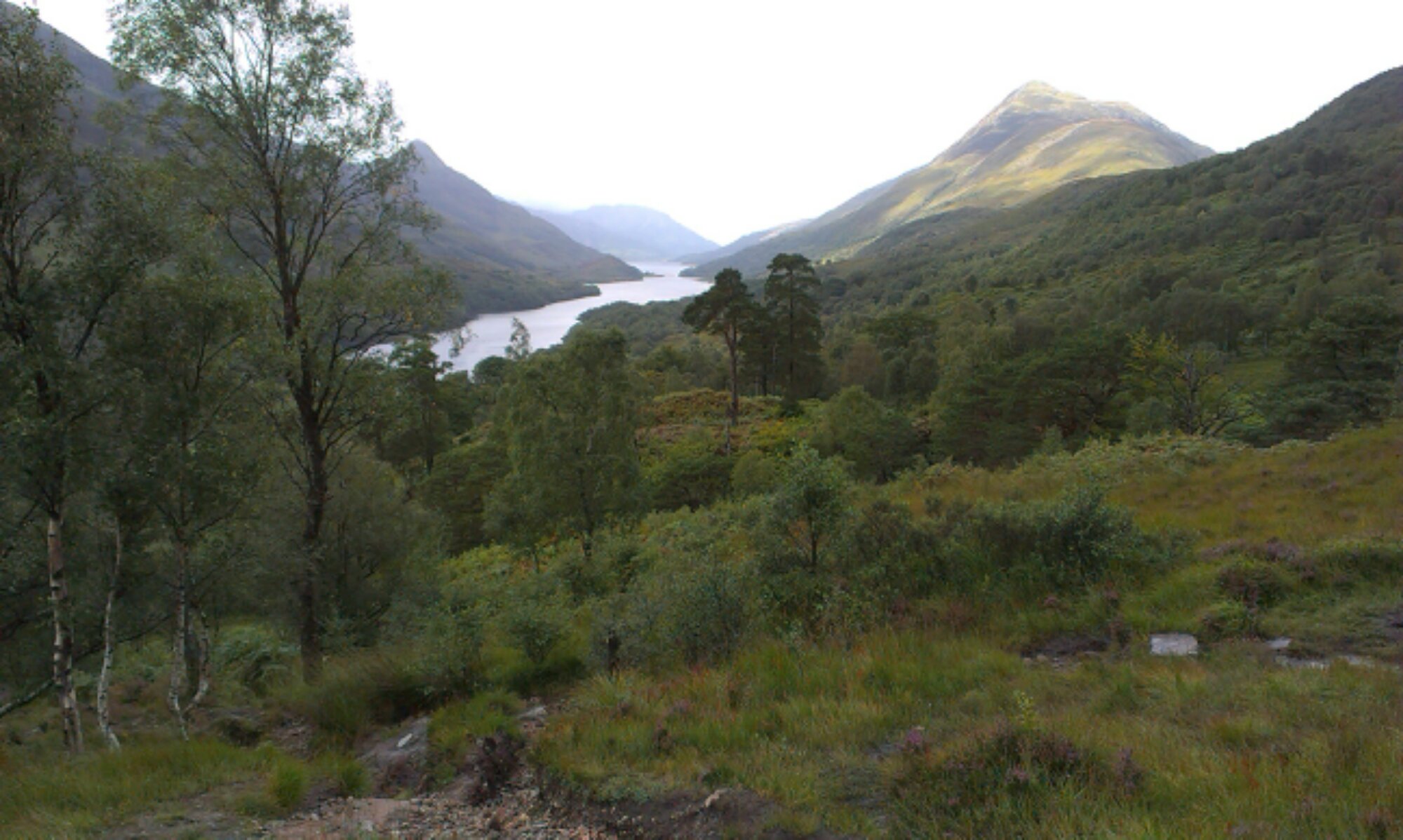 Looking up Loch Leven from above the Grey Mare’s Tail 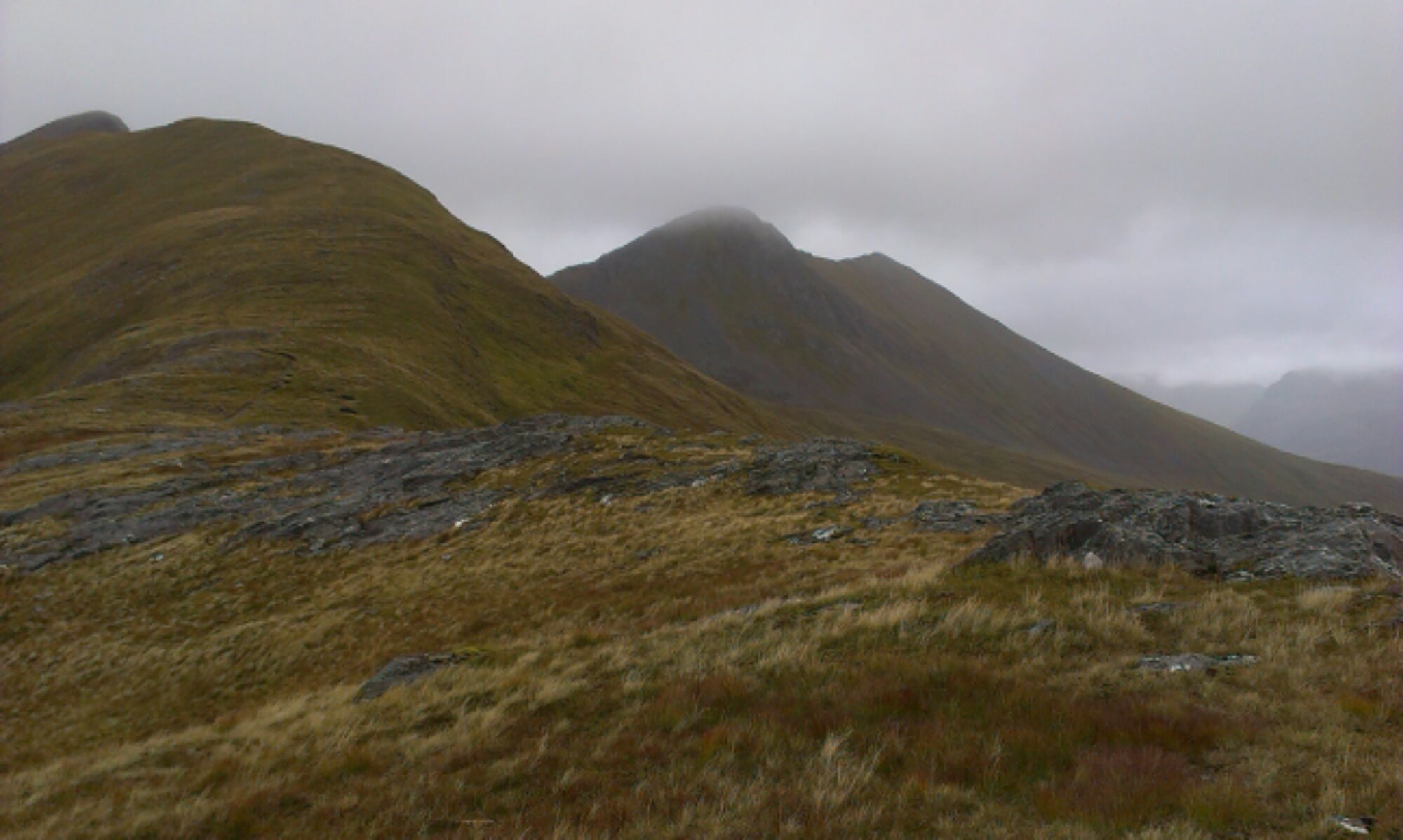 Looking back west from the bealach 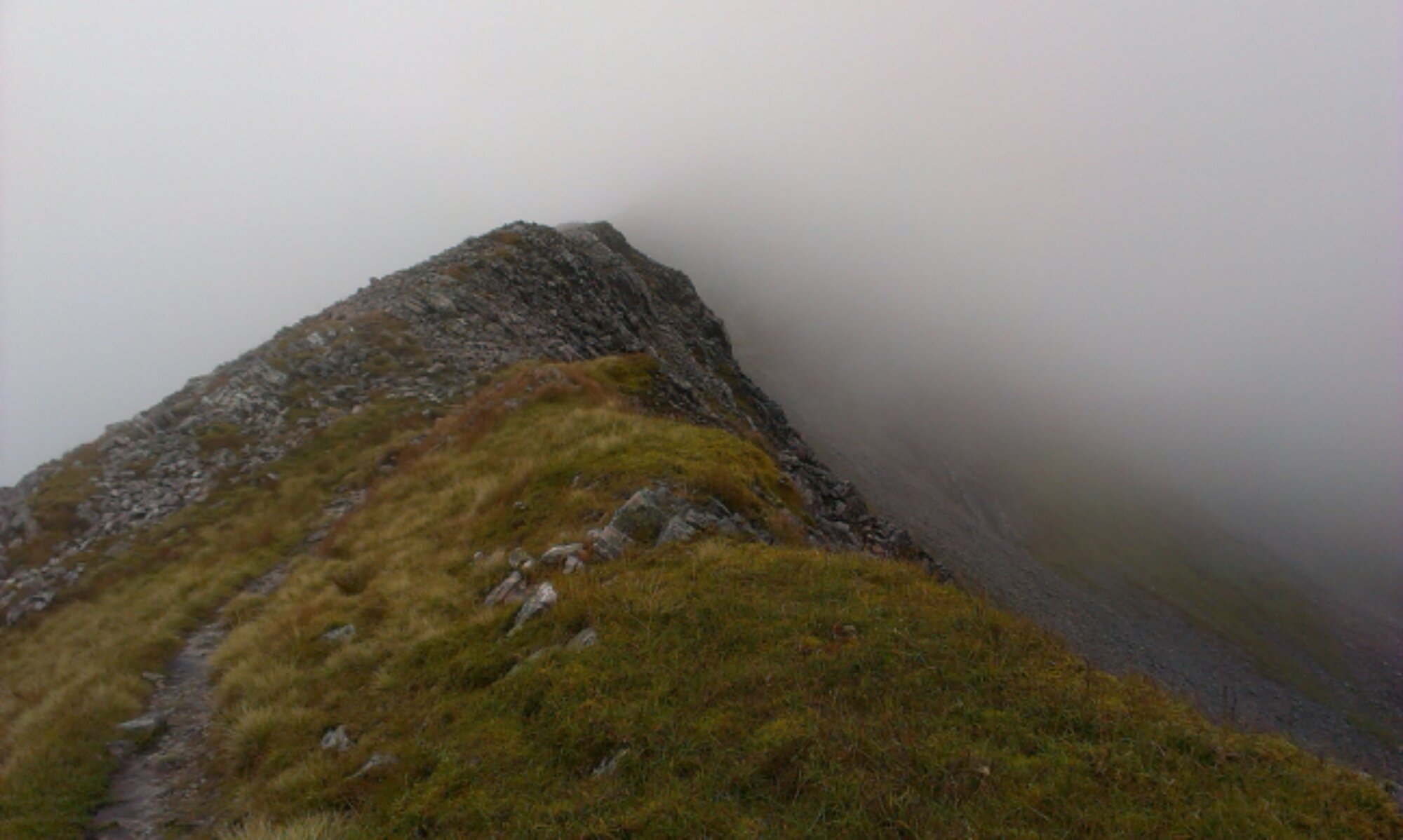 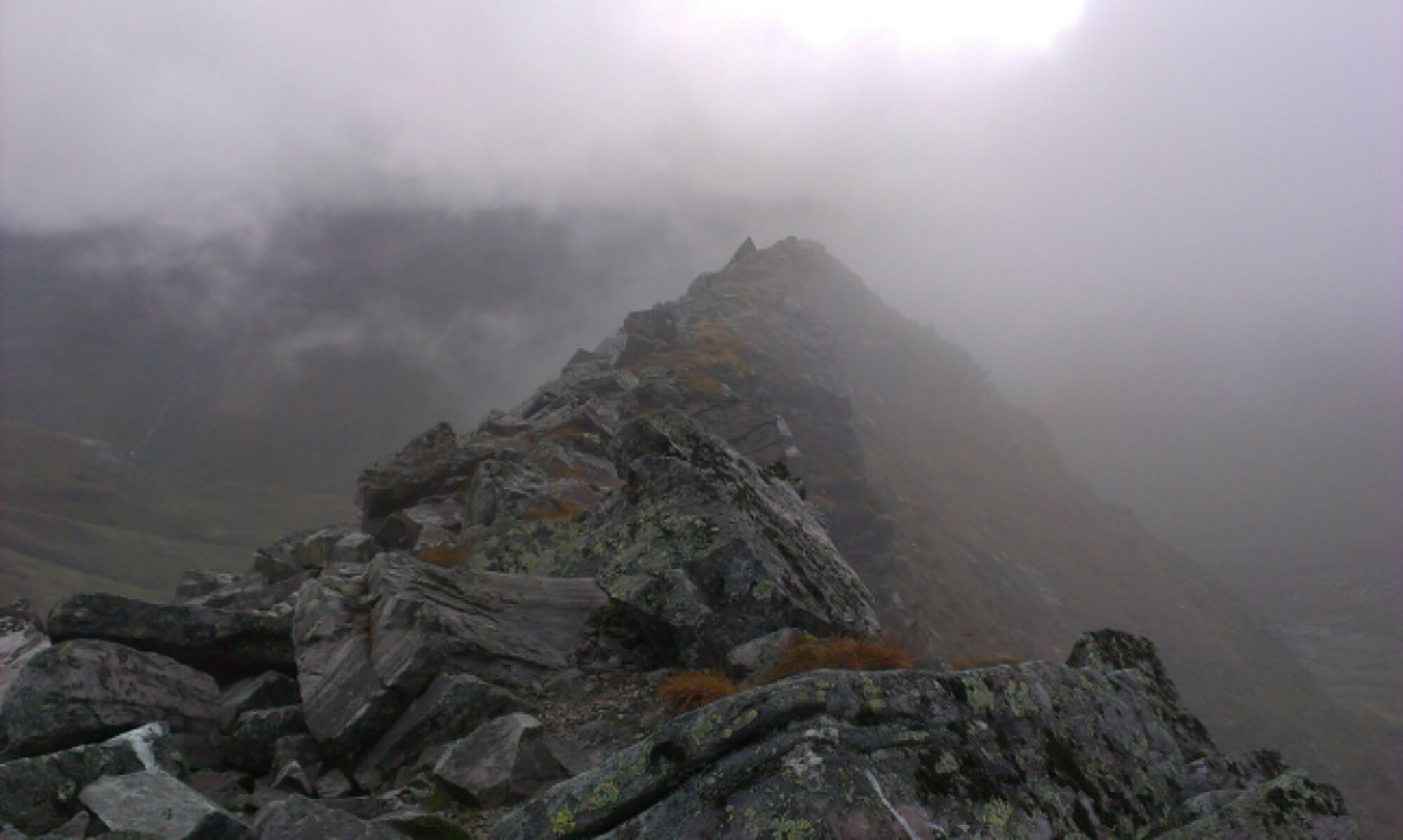 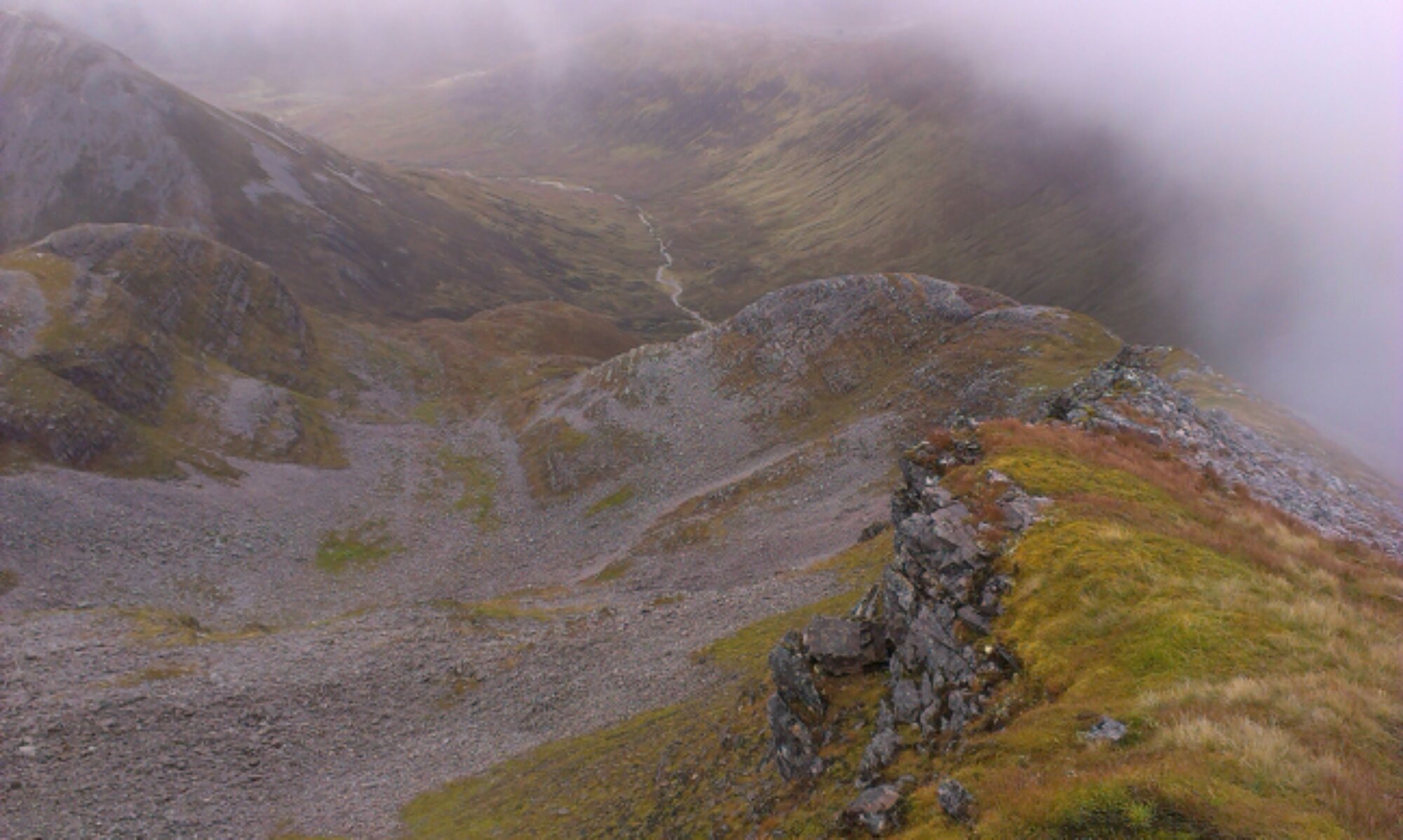 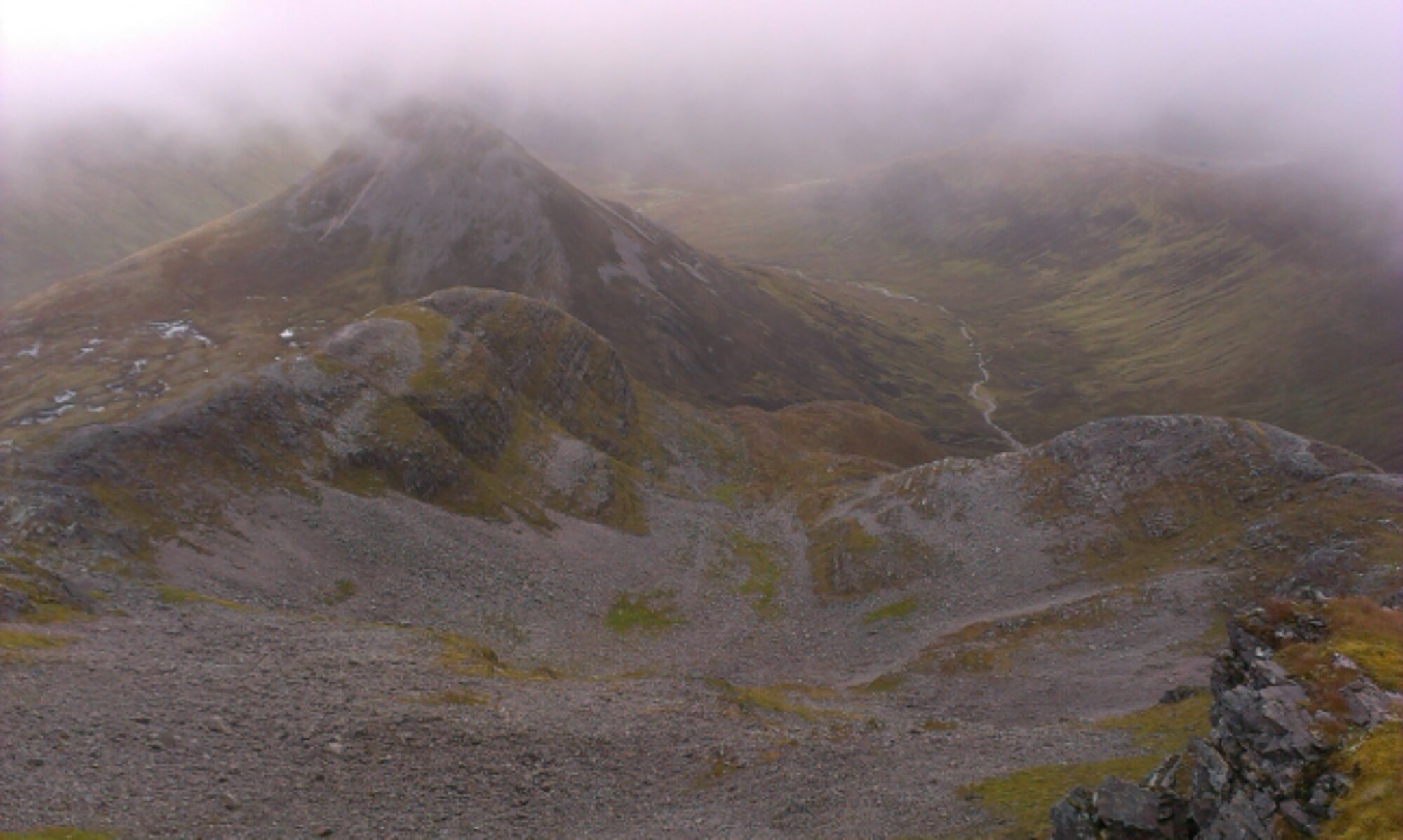 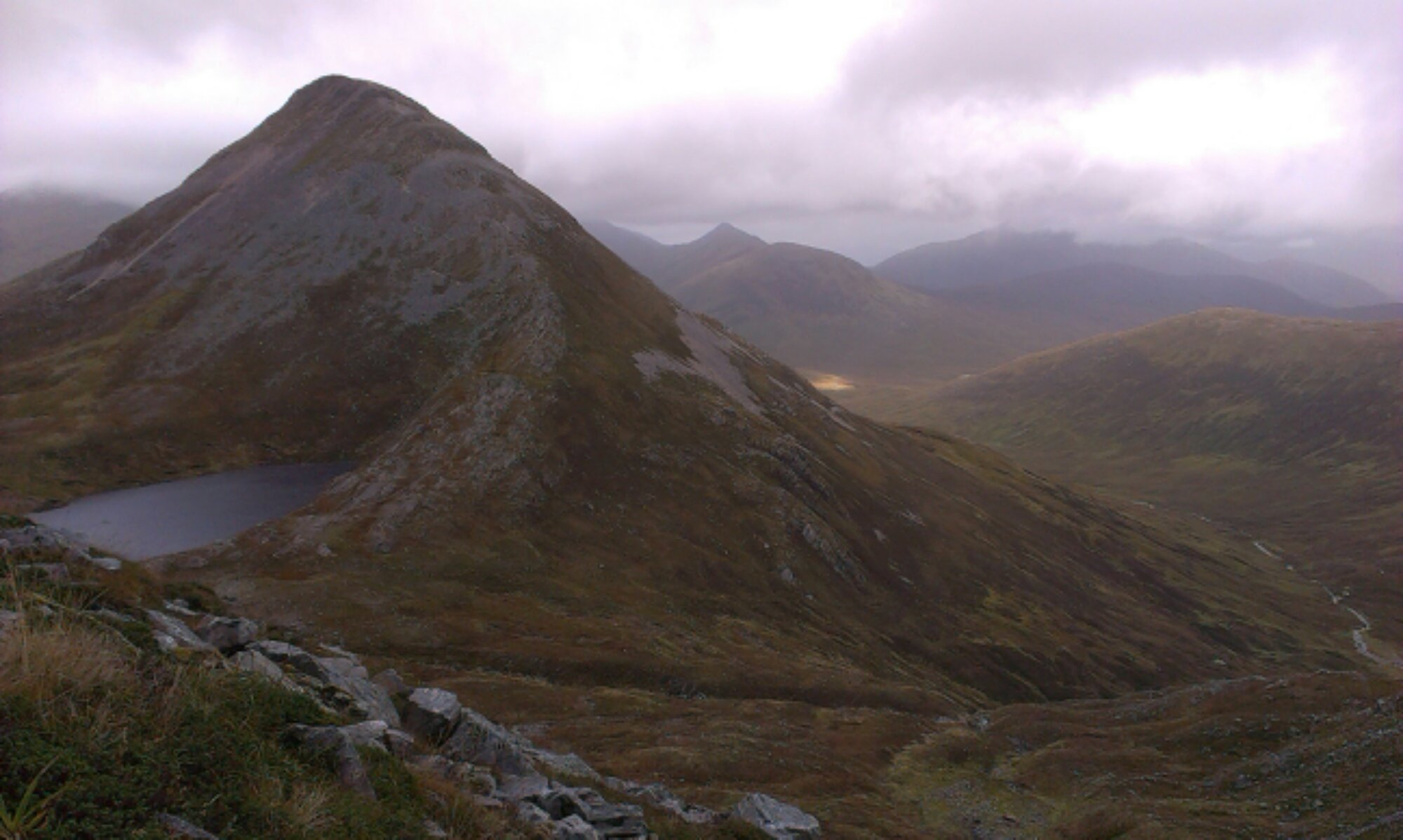 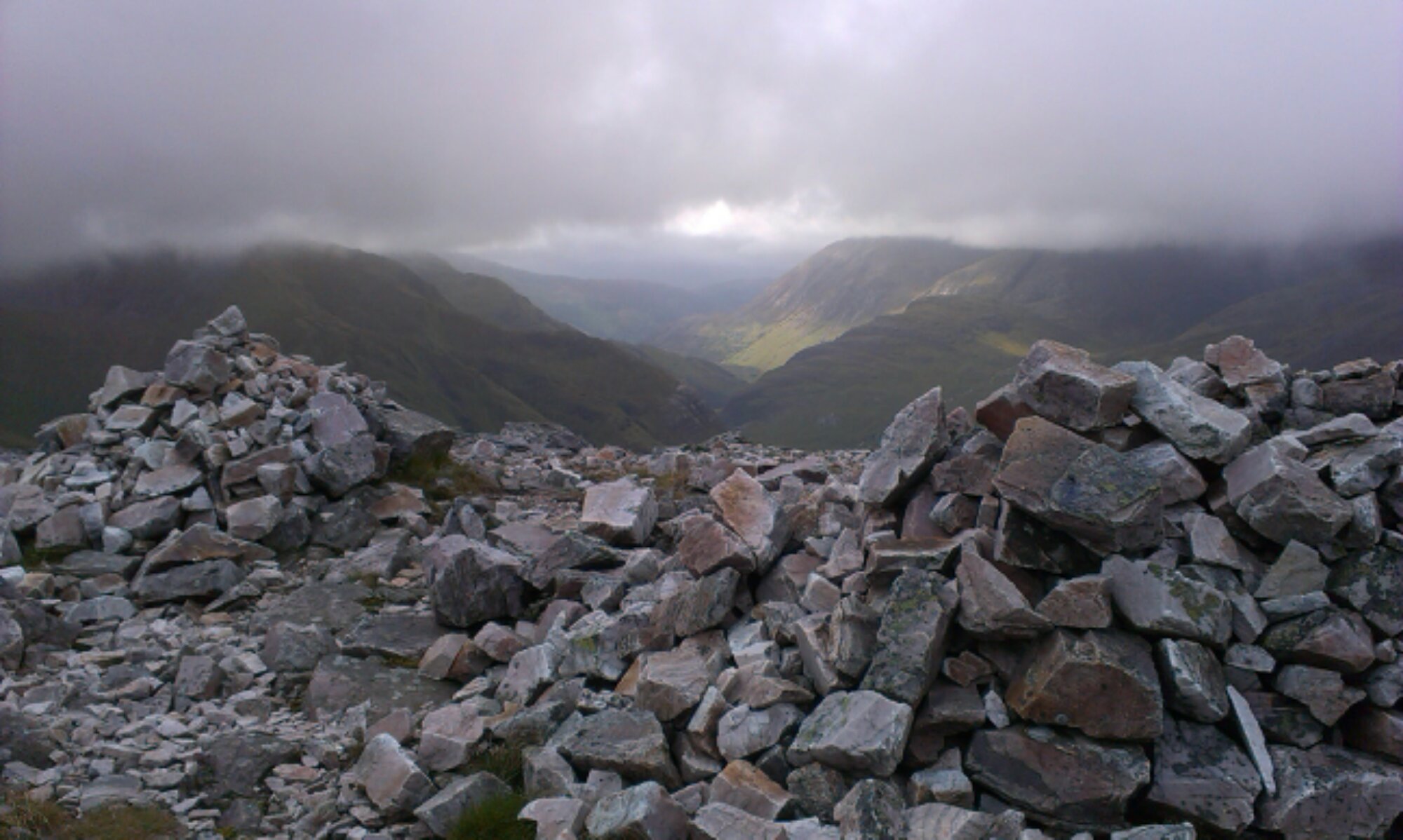 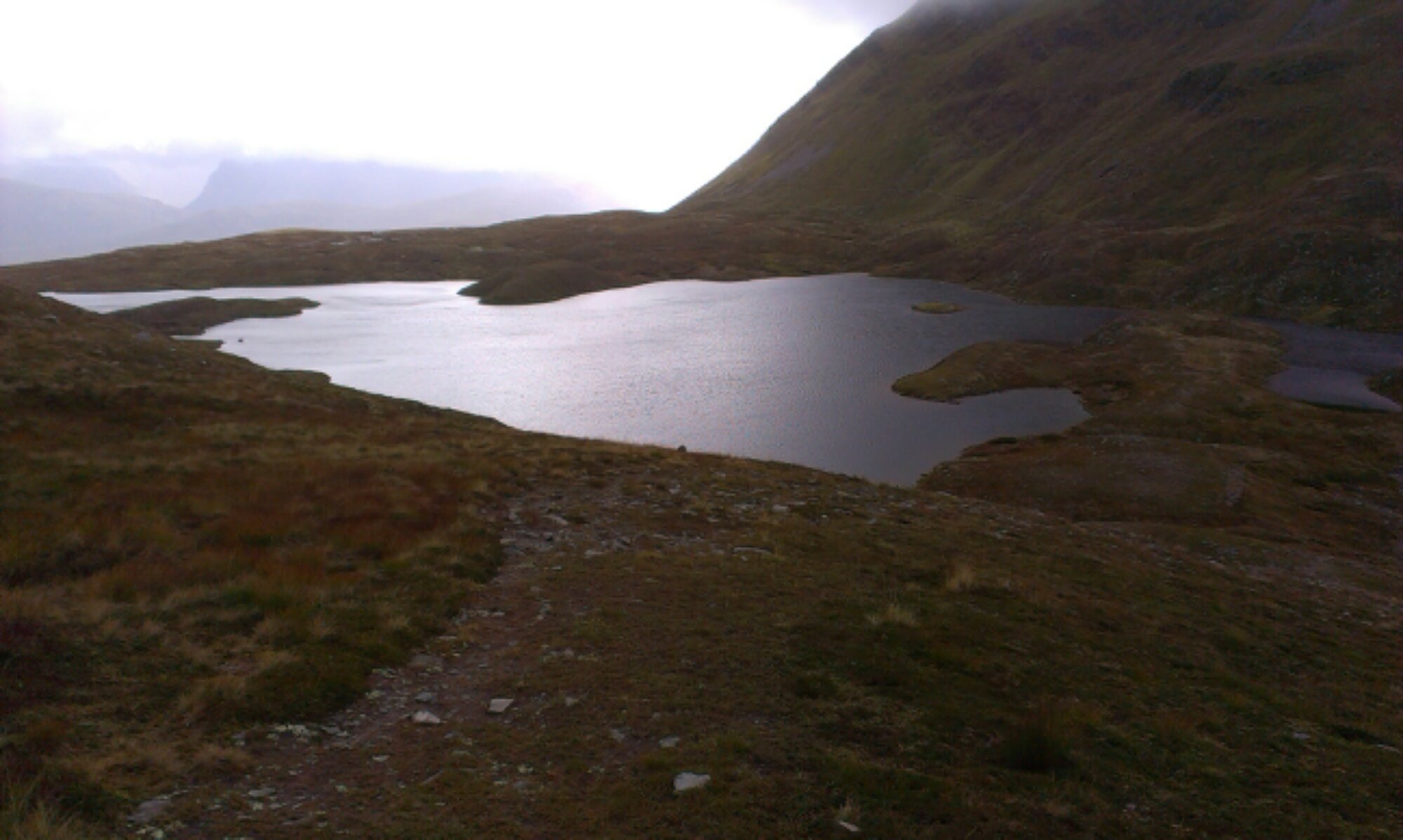 A rough estimate for 25 mins to the summit of Binnien Beag was reduced to only 18 mins. Incredible seeing how slow I was going. Another good descent and it was off on the incredibly runnable stalker a path to Sgurr Eilde Mhor. Slowly catching the walker, I was nearly at the bottom of the zig zags when he dropped out of site at the top. I decided on a direct line up the eastern side of the zig zags, joining the path to Sgurr Dilde Mhor as it started to contour round the northern edge to reach the scree slope up time the summit. I popped out onto the summit about 2 mins behind the walker I’d met on Binnien Beag. Quick look around as the cloud was drifting in and out. The wilds out to Corrour behind lit up by the sun. That Ramsey Round is a long way indeed.. 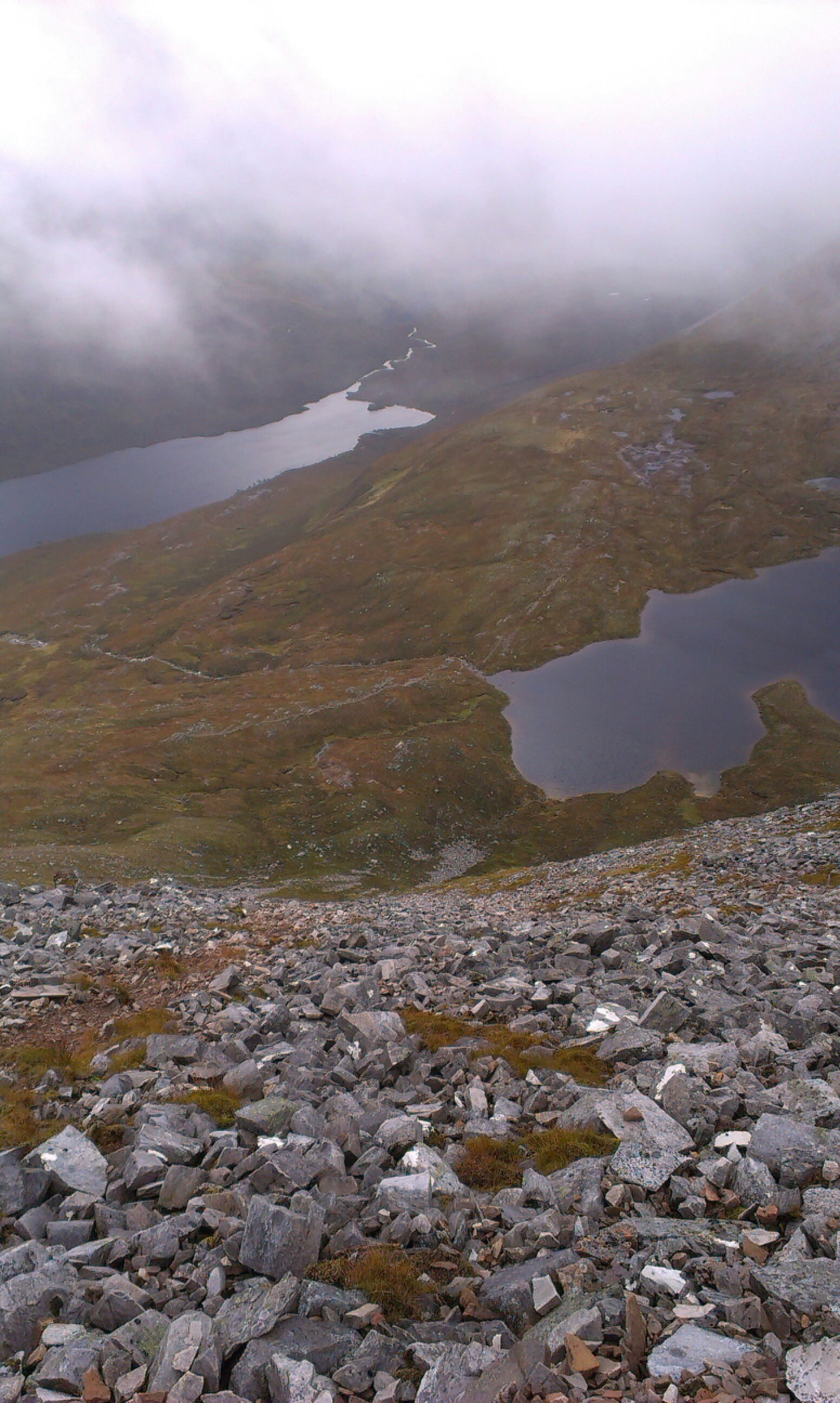 I opted for the direct descent dropping of the summit straight for the Lochan, finding sort of a path in the steep scree. It proved a fairly straight forward descent if a but steep.

Once at the Lochan I had a quick bite to eat and drink and sort out clothes, shedding layers for the blast back out. It was then off down the stalkers path back to Kinlochleven. The path is fairly rocky, and I felt my Oroc’s were just to stiff in the soles to feel the path right, slowing my flow. Looking forward to getting a pair of Saloman Fellraisers later in the year, as the look so comfy, but so grippy! 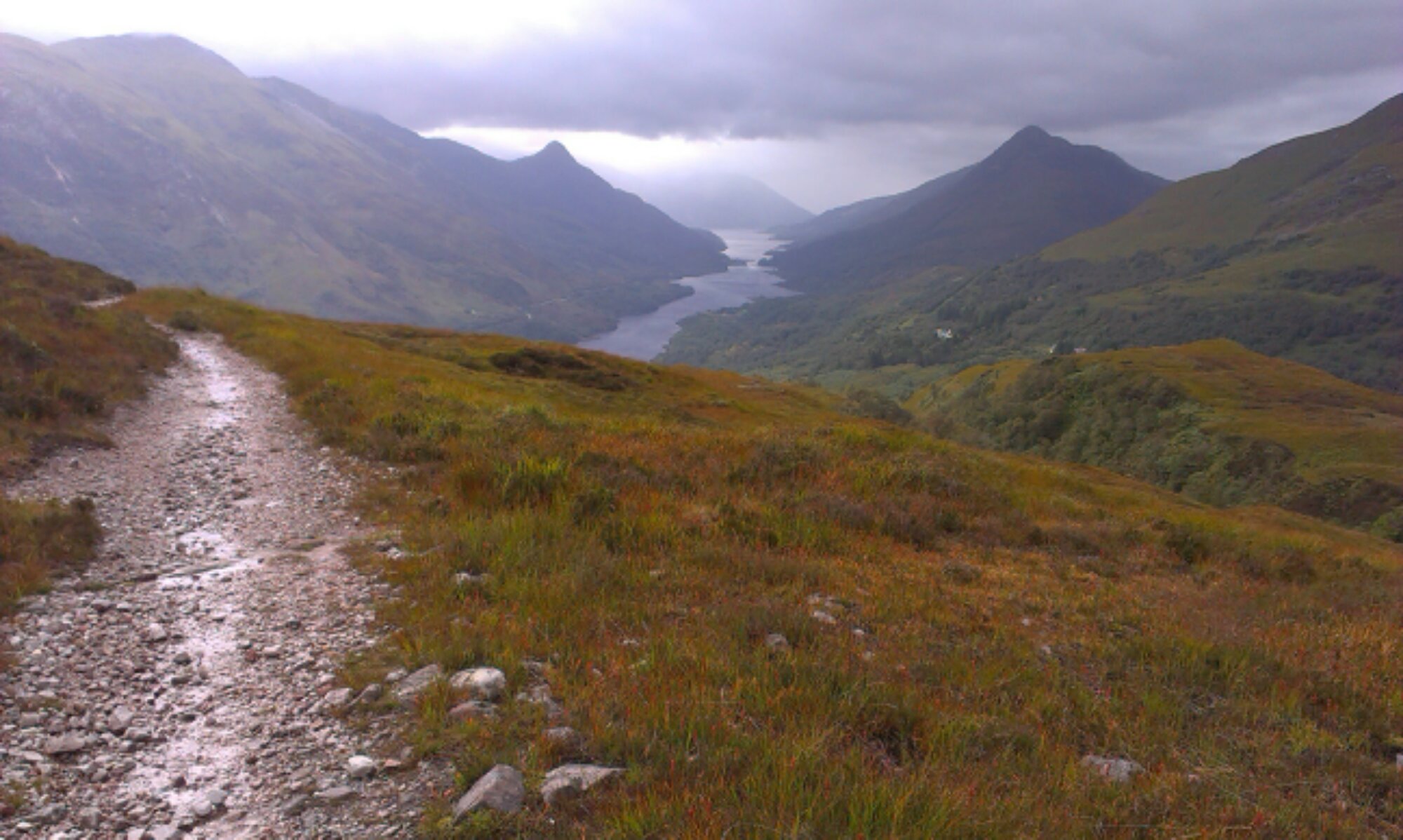 As really enjoyable descent, taken at a leisurely jog. My legs were feeling tired by now, and the sore throat making its presence felt. Then last drop down into Kinlochleven is a brute on tired legs. A full 1200 feet. Again the shoes were making it hard work. Finally back down into Wades road in a slow 5h30m ish. 14 miles and 6300′ ascent. Pretty pleased really considering I wasn’t feeling great.

On the shoe front, they held up well on very rough, sharp quartzite blocks and scree, so please with durability, but just didn’t feel confident withe them like I would in a pair of mud claws. There’s no doubting their ability in the winter on snow, ice and verglas, but just to stiff really for summer on rocky ground. 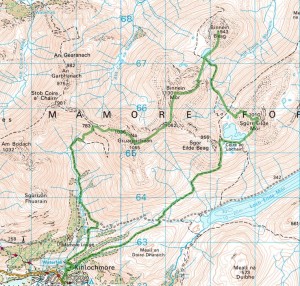